Boots have a 3 for 2 offer on all Soap & Glory facial skincare products at the moment, both online and instore. I had been wanting to purchase their 'Glow Job' Daily Radiance Moisture Lotion for a while, but once I was faced with the 3for2 offer I also fancied trying out The Fab Pore Hot Cloth Cleanser. I got the 'Wonderfill' Wrinkle filler too, just as the third product as part of the offer really, and in the hope that it may make me look that little bit more youthful :-) 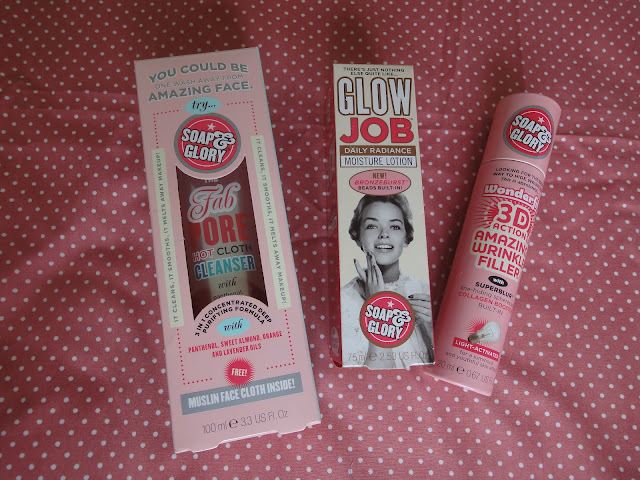 I had read a few mixed reviews about the 'Glow Job' product, but still really wanted to try it out for myself. It is a white lotion that contains little micro beads that, when burst, release a sort of bronzing colour into the cream and this eventually mixes in to create a healthy glow. 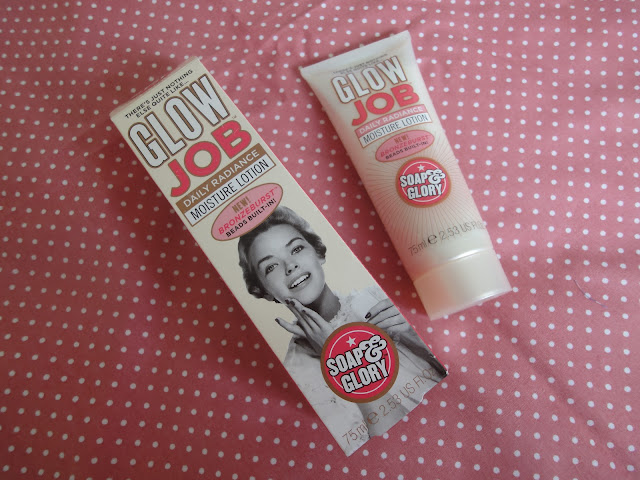 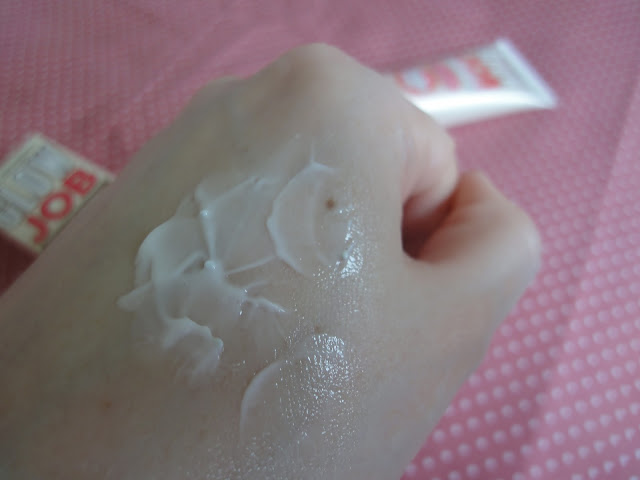 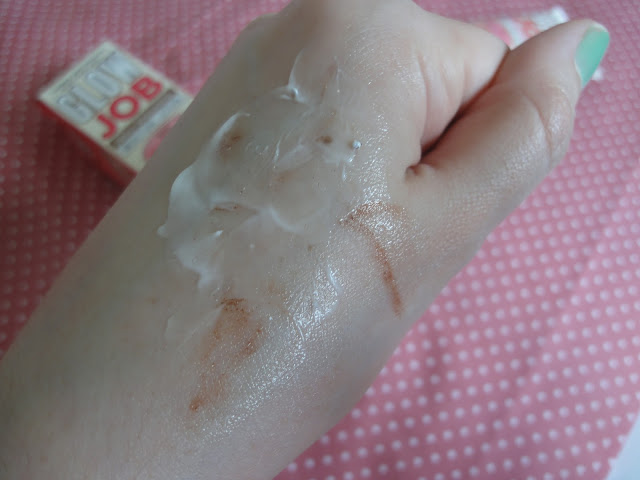 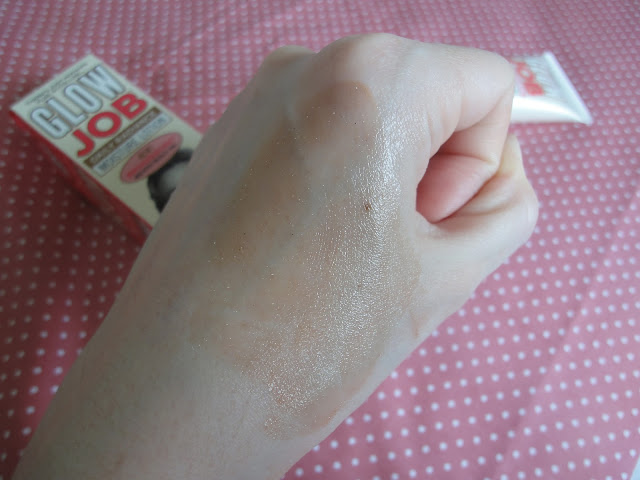 The first issue I had with this product is the bursting of the little beads - some of them take quite a bit of pressure and the whole concept as a product takes a bit of getting used to. I also found that the beads weren't evenly distributed throughout the cream, so you could have two equally sized blobs of cream, and one has about two beads in it and the other may have about 5 or 6. This then obviously affects the level of colour and sometimes can be a bit uneven on your face. It is a good tinted moisturiser, but I am quite pale and it is just a little too dark for my skin tone. If I had a tan though, it would be such a great product. As with all Soap & glory products, it smells great too!! 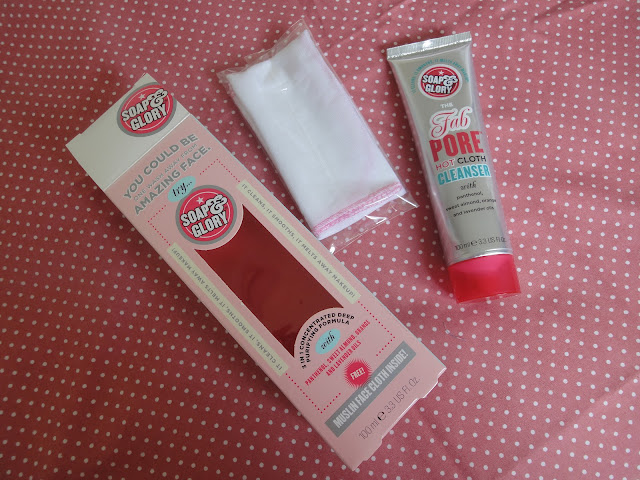 The next product is the Hot Cloth Cleanser. I bought this mainly because I had read a few reviews that claimed the ingredients in this product are identical to those in the Liz Earle Cleanse & Polish Hot Cloth Cleanser. It is 100ml size, which is the same as the Liz Earle Cleanser, but around 3 pounds cheaper in price. It has a lovely scent, and is a nice consistency - although I did tend to have to use more of the Soap & Glory Cleanser in comparison to the Liz Earle Cleanser as it seems to evaporate quite quickly. I have quite sensitive skin, and after about 30 seconds application it made my skin tingle to the point where it was bordering on a mild stinging sensation. I followed the instructions, and left it on my face for two minutes in total, but I don't feel that it removed all of my eye make-up as effectively as the Liz Earle Cleanse & Polish, nor did it leave my skin feeling as soft and moisturised. It is a good substitute product for Liz Earle Hot Cloth Cleanser though, and comes with the cutest pink-edged muslin cloth. It just hasn't managed to convert me from my trusty Liz Earle!! 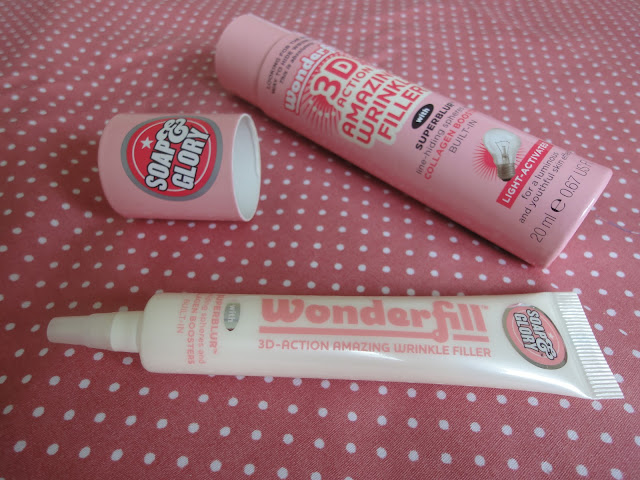 And my spur of the moment product was the Wonderfill wrinkle filler. This is a cream that claims to literally fill in your wrinkles (kind of like posh polyfiller for skin, or cheap botox?!). It boasts line fighting superpeptides, a special oxygen boosting skin stimulating complex, exclusive light-activated Superblur line-disguising spheres, and a wrinkle plumping moisture matrix. Could they be any more scientific if they tried?! You just dab a little cream on areas of skin prone to wrinkles and the lines become less apparent. All I have to say is that Wonderfill is most definately Wonderful!! I have light crows feet (or laughter lines as I prefer to call them) at the corners of my eyes, and this little gem just smoothed them right out. Instantly. I applied concealer on top, and it just glided effortlessly across rather than settle in the creases as it normally would, and this is an effect that lasted for around 8 hours. Highly, highly recommended to those who are attempting to cut around 5 years off your age!!

Email ThisBlogThis!Share to TwitterShare to FacebookShare to Pinterest
Labels: Soap and Glory